The history of ISL by Alumni Roger Zanes (1966)

In its first year the school was named the “Association of the English School Lausanne” as evidenced by the photo below, which shows my first report card and was signed by my teacher, the ever-inestimable Ruth Hynes. My fellow students were, as best I can remember, Corinne Brawner, Betsy Ginkel, Rosemary DeBelay, Fiona Wylie, Jeremy Evans, and Scott White. About the only memory I have of that first year of school was that we had very hot soup for lunch every day at a communal table in one of the rehearsal rooms, and one day Scott White mishandled receiving his bowl and it poured into his lap and caused him quite a bit of discomfort.

The school’s first year was quite a success, so in the spring of 1963 several fathers, including mine, and all led by the late Rev. Andrew Wylie, met to form what would be known for one year (the 1963-64 school year) as the Commonwealth-American Primary School, or CAPS. It was sometime about then that I believe my father hired someone who became an institution at CAS, Gisela Barbey. I can’t read the name of my teacher that first semester, but know that for the second semester and on through the 1964-65 year my teacher was Elisabeth Kirchem, who became a family friend and who took my sister Susan and I on a lot a great adventures.

For the 1964-65 school year, the School was renamed Commonwealth-American School, or CAS, due to, I believe, the school’s expansion to have 7th-9th grade students, so it was no longer just a primary school. The image below shows the format for the first CAS report cards. I still think it is just wonderful that these special teachers took so much time to write well-thought out comments about each of us. We really were lucky to have grown up in such an era!

1965-66 was my last year at CAS, and Mrs. McLaren was my teacher. The classroom was the large one that was on the southwest corner of the second floor. I would imagine I was quite a challenge for her, as I remember joining forces with the likes of Ricky Webb, Norman Zobrist, and Johnny Steeb to “entertain” the rest of the class. In fact, on the backside of my report card for the January-March 1966 semester, Headmaster Peter Farrow wrote, “A likeable boy who was in trouble with me at the beginning of the term, but now appears to have mended his ways.” But I must have learned to turn on the charm with him, because at the end of my final report card, Headmaster Farrow wrote, “I shall miss Roger’s sense of humour.”

My years in Switzerland were magical, and I developed a love for the country that I still hold and always will. I have so many wonderful memories of skiing in Villars and Gstaad, hiking in Leysin, skating on the Lac de Bret, picnicking in La Lecherette, and just enjoying all that Lausanne had to offer, especially Montchoisi and pretty much anywhere along the Lac. I was lucky enough that after our first year, during which we lived in an apartment block in Chailly, my parents moved to 21 Ave. des Desertes, from the balcony of which we had a spectacular view of Evians-les-Bains (on clear days) and the French Alps rising up behind it, all the way down towards Montreux, with the “Two Teeth” peaks that rise above Leysin but that I now know are called the Dents d’Ai.

And, finally, the photo of me below is of me at the Gornergrat for my 10th birthday, just before leaving Switzerland. I went with my mother and my birthday present was one of those “does everything” Swiss Army knives.  I treasured this gift for years until it was stolen many years later during one of our international moves. 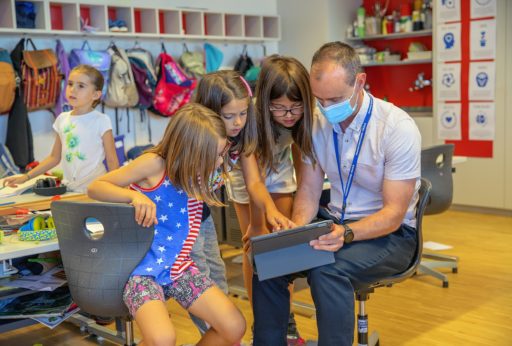