The journey of our visual identity

The logo has reflected this evolution of diversity, moving from including specific flags to a more general map. If you look carefully, however, the map that sits below the Swiss flag is a Mercator projection, which over emphasizes landmasses towards the poles and under emphasizes land at the equator. As an ex-student pointed out to me, a skewed map affects how people view the world. Size, position (top, bottom, centre, side) and importance have long been synonymous with each other.

Now the school has more than 950 students from 68 nationalities. It is a truly global community, and the challenge we set ourselves was to reflect this community in an inclusive way.

A second reason for change was that people regularly commented when they visited the school for the first time that the bustle and buzz of the school isn’t reflected in how we present ourselves online. The website comes across as stiff and traditional when in reality we are anything but. Our key colours – red and blue – are also the most common choice of colours amongst schools. We just didn’t stand out.

The third reason is that our logo is difficult to use in different situations. We have developed different versions to compensate, which worked well for different purposes, but that meant that there was not the sense of cohesion that one would expect. We wanted something that could scale easily and work better, in presentations, in class, on phone screens and on laptops.

We are pleased with the result and we hope that you will like the new design too. Learn more about it here 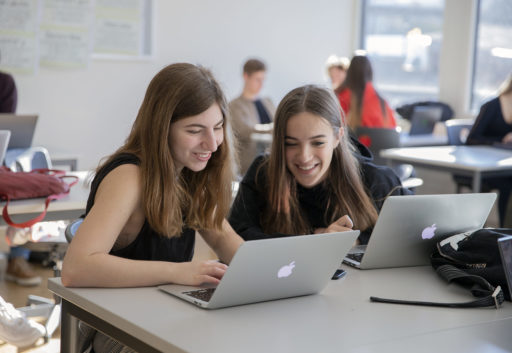 The impact of COVID-19 on the classroom