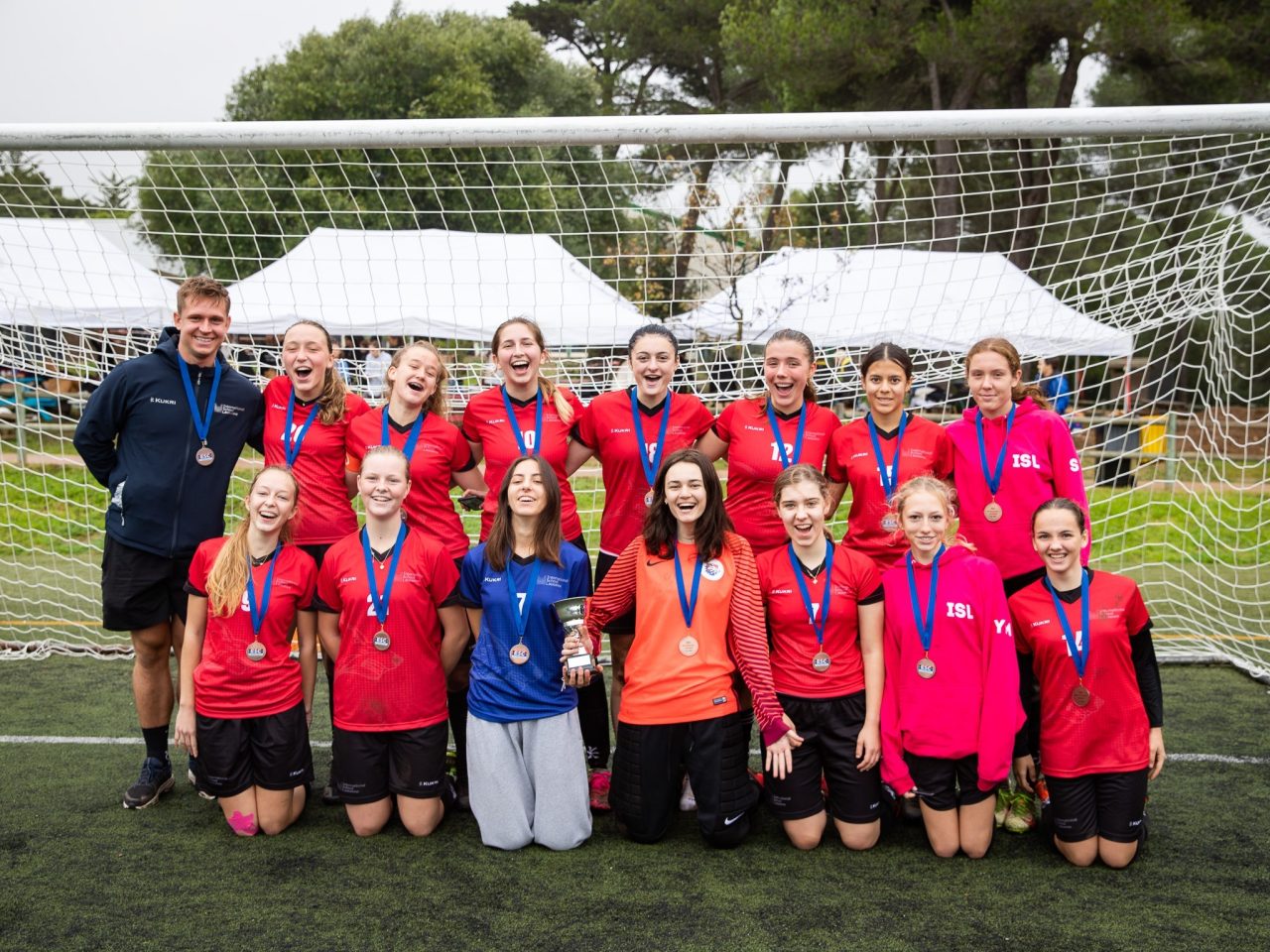 This weekend, fourteen International School of Lausanne students, from Year 10 to Year 13, flew to Lisbon for the Football Category A-B Girls Tournament, organised by the European Sports Conference, and hosted by the Saint-Julian’s School in Lisbon. With their coach, Anders Bak, (Activities and Sports Coordinator, After School Activities) and their chaperone Ms Spoerri (Marketing and Communication Specialist), the team had a truly unforgettable experience! The players were all excited to demonstrate the result of months of practice – in all weather conditions – and to challenge themselves against the other teams participating in the tournament. Read on to share in a weekend of sport, friendship, and fun…

The Cat. A Girls football is just one of the International School of Lausanne’s popular and successful competitive sport teams. ISL students benefit from an extensive range of After-School Activities, an inclusive range of activities for students from Reception 4 to Year 13. Sports Competition is one of the most in-demand activities; with a programme running throughout the year, teams train and compete for two seasons, both locally and internationally.

ISL participates in over 200 competitions each year. Keen athletes can therefore try-out for various competitive sport teams, such as basketball, tennis, swimming, volleyball, many others… and, of course, football.  And one of the big bonuses of being on a sports team is when it gives the students the chance to discover a new culture – as the football team found out this weekend when they travelled to Lisbon for the Cat A-B Girls Tournament.

“The European Sports Conference is the main event of the season. It is what everyone looks forward to. It is a unique opportunity to test your level against some of the strongest International European Schools.” (Coach Anders)

After three years coaching football at ISL, Coach Anders has particularly appreciated the chance to train the Cat. A Girls Football team. As he points out: “One of the challenges – as well as an opportunity – with this team is that it is formed by a mix of Cat. B and Cat. A players. We have players in the team who have played football since they were three years old, and some players who just started playing for the first time this season. Nevertheless, everyone has been included and made to feel a valued part of the team, and the more experienced players have shown incredible leadership skills.”

The players have known about the European Sports Conference tournament since the very first practice of the year, during the try-outs in August. Seeing the quality of the team, Coach Anders ensured that this tournament became the main objective for the season: “Our practices were tailored to prepare the team for this tournament, and we used every tournament, every match, to make the necessary adjustments prior to this event. The season is short, and I only had two months and a half to prepare the team. Our weekly practices included physical tests, decision making drills, tactical compositions, among others.”

Maria (Year 10), who plays central defense, was particularly excited about this tournament as it was her first competition abroad. Their first game on Monday was against TASIS, The American School in Switzerland. The pitch was muddy and slippery – challenging conditions for some, but an opportunity for the ISL players, as they used this as the impetus to take longer passes and shots. After this game, Juliana (Year 10) joyfully exclaimed: “Last year we finished second in the tournament. This year, I feel that the team is solidly trained, and we have great potential!”

The fact that this tournament occurred in Portugal is certainly a nod to the country’s sporting culture. As we travelled from the airport, everyone was excited to spot the stadiums of the Benfica and Sporting teams, famous for their legendary rivalry. Football has been the most popular sport in Portugal for many decades – and for good reason. The locals say that football began to flourish in Portugal more than a century ago. Football clubs started springing up everywhere, and the more they played it, the more they loved the game.

The St Julian’s school celebrate the Portuguese culture on their walls, and football is one of the most popular sports in the school – the pitch is always full of local young supporters here to encourage their favourite team!

At the end of several fulfilling and memorable days, team captain Beatrice (Year 13), found it difficult to decide on the highlight of the trip: “One of the best parts was making a fun video together; another was the time we spend together between the games on Saturday, watching the other teams playing. It was a really good team bonding moment.”

The players were particularly proud of how successfully they performed as a team: “I think we work together super effectively and have a lot of chemistry. We get along very well as friends as well as players, and being such good friends allows us to play so much better as a team.” (Caitlin, Year 13) Caitlin scored one of the goals against St Julian’s School. As this is her last ESC tournament with the team, this was a particularly special moment.

Grace (Year 13), who is also in her final year at ISL, added, “We worked really well together. If we get mad, we apologise. We are very good at encouraging each together and at having fun together.”

“Being in different year levels, we don’t necessarily hang out together at school. However, we’ve become friends playing in the team together, and that makes us play even better.” (Norah & Ann, both Year 12).

As Coach Anders confirms, “One of the main goals for this season was to create a homogeneous understanding of how we play the best as a team, which they have proven to succeed with.”

As the students reflected on their key takeaways from this whole experience, for Norah (Year 12), the memory that stayed with her was not one from the pitch, but rather the simple pleasure of going with her team members to one of Lisbon’s beautiful beaches.

For Shea (Year 13), the challenges of the journey to Lisbon is something that she will remember as an unforgettable adventure, reflecting with good-humour: “One of my key takeaways from this whole experience is that Lego has no age limit. Lego is something that can keep even eighteen-year-olds busy for hours. It’s also the perfect purchase for airports when planes are delayed…” And indeed, one of the loveliest team bonding moments was as the students sat together at the airport, contentedly building Lego before finally boarding our flight.

However, while it was difficult for the players to choose their favourite moment, one thing they all agreed on was that that one of the absolute best parts of the trip was laughing with Coach Anders, especially when they played songs from his homeland of Denmark.

And, when it comes to the play itself, it was impressive to observe the power and aggression of the players – the team consistently played with speed, stamina and skill that are a testament to both their and Coach Anders’ efforts and commitment to their training. However, the “human” side of the sport should not be forgotten, and the team from the International School of Lausanne demonstrated this throughout this whole tournament.

As Caitlin (Year 13) and Shea (Year 13) reflected: “The best way to feel powerful and like a victor on the pitch is to continue to show good sportsmanship even when other teams are not. In a contact sport like football, emotions often run high, which can lead to unsportsmanlike behaviour. When we were encountered with this, we continued to embody the ISL’s value of respect, and when the high of the game faded, we felt so much better about not letting adversity get the best of us.”

The International School of Lausanne Cat A-B Girls team can be proud of themselves. Not only did they finish the ESC tournament in overall third place, but they also created memories for a lifetime and showed that friendships go beyond any year level differences. As a happy Coach Anders concluded as we journeyed back to Switzerland:

“I have always been proud of the players, and during this tournament, both on and off the pitch, the team has proven that I have the best reason to be proud.”

So again, congratulations to the team, and GO WOLVES! 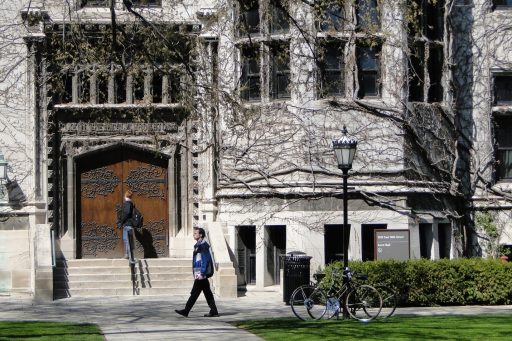 “Friendships and discoveries for life…” – A conversation with our International School of Lausanne Alumni, Marc-Antoine Manzoni 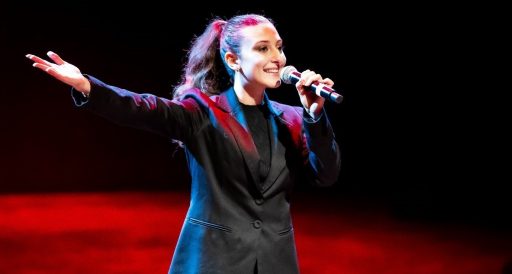